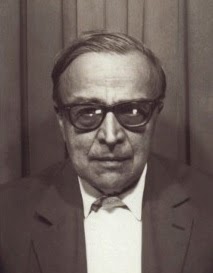 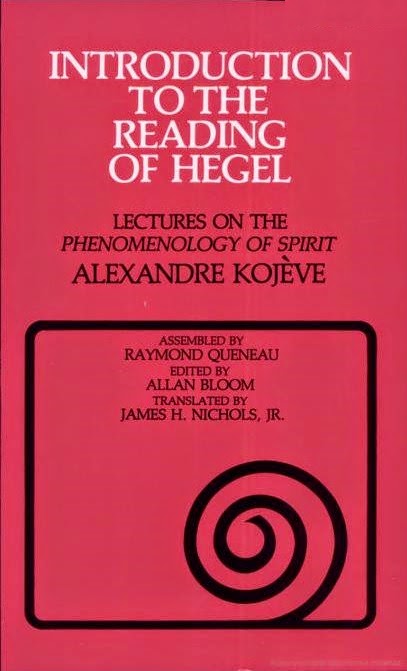 As I have already said, Spinoza's system is the perfect incarnation of the absurd. (And that is why, when one tries to "realize" his thought, as we say, one experiences the same feeling of dizziness as when one is faced with a paradox of formal logic or set theory.)

Now, a particularly curious thing: absolute error or absurdity is, and must be, just as "circular" as the truth. Thus, Spinoza's (and Parmenides') absolute Knowledge must be symbolized by a closed circle (without a central point, of course): Figure 12 [zie onder]. Indeed, if Spinoza says that the Concept is Eternity, whereas Hegel says that it is time, they have this much in common: the Concept is not a relationship. (Or, if you like, it is in relation only to itself.) Being and (conceptual) Thought are one and the same thing, Parmenides said. Thought (or the Concept) is the attribute of Substance, which is not different from its attribute, Spinoza says. Therefore, in both cases—that is, in Parmenides-Spinoza and in Hegel—there is no "reflection" on Being. In both cases, Being itself is what reflects on itself in and through, or—better yet—as, [118] Concept. Absolute Knowledge that reflects the totality of Being, therefore, is just as closed in itself, just as "circular," as Being itself in its totality: there is nothing outside of the Knowledge, as there is nothing outside of Being. But there is an essential difference: Parmenides-Spinoza's Concept-Being is Eternity, whereas Hegel's Concept-Being is Time. Consequently, Spinozist absolute Knowledge, too, must be Eternity. That is to say that it must exclude Time. In other words: there is no need of Time to realize it; the Ethics must be thought, written, and read "in a trice." And that is the thing's absurdity. [Plotinus, however, accepts this consequence.]

This absurdity was already denounced by Plato in his Parmenides. If Being is truly one (or more exactly, the One)—i.e., if it excludes diversity, all diversity—and therefore all change— i.e., if it is Eternity that annuls Time—if, I say, Being is the One, a man could not speak of it, Plato remarks. Indeed, Discourse would have to be just as one as the Being that it reveals, and therefore could not go beyond the single word "one." And even that.
.. . For Time is still the crucial question. Discourse must be intemporal: now, if he has not the time, man cannot even pronounce a single word. If Being is one, or, what amounts to the same thing, if the Concept is Eternity, "absolute Knowledge" reduces for Man to absolute silence.*11

I say: for Man. That is, for the speaking being that lives in Time and needs time in order to live and to speak (i.e., in order to think by means of the Concept). Now, as we have seen, the Concept as such is not (or at least does not seem to be) necessarily attached to Time. The universe of Concepts or of Ideas can be conceived of as a universe of Discourse: as an eternal Discourse, in which all the elements coexist. [This is what Plotinus says.] And as a matter of fact, there are (it seems) nontemporal relations, between Concepts: all Euclid's theorems, for example, exist simultaneously within the entirety of his axioms. [And Plotinus insists on this fact.] Hence there would be a nontemporal Discourse.*12 The idea of the Spinozist System, then, is not absurd: quite simply, it is the idea of absolute Knowledge. What is absurd is that this System is [119 Figures, 120] supposed to have been fabricated by a man, who in actual fact needed time in order to fabricate it. [Accordingly, in Plotinus, this system belongs to the eternal Intelligence.] Or else, again: the System can exist outside of Time; but, starting from temporal existence, there is no access to this System. (The Spinozist System is Hegel's Logik, for which there would not and could not be a Phenomenology that "leads" to it; or else, it is Descartes' System, to which one could not find access through a Discourse on Method.)

The Ethics is made in accordance with a method of which an account cannot be given in human language. For the Ethics explains everything, except the possibility for a man living in time to write it. And if the Phenomenology explains why the Logik appears at a certain moment of history and not at another, the Ethics proves the impossibility of its own appearance at any moment of time whatsoever. In short, the Ethics could have been written, if it is true, only by God himself; and, let us take care to note—by a nonincarnated God.

Therefore, the difference between Spinoza and Hegel can be formulated in the following way: Hegel becomes God by thinking or writing the Logik; or, if you like, it is by becoming God that he writes or thinks it. Spinoza, on the other hand, must be God from all eternity in order to be able to write or think his Ethics. Now, if a being that becomes God in time can be called "God" only provided that it uses this term as a metaphor (a correct metaphor, by the way), the being that has always been God is God in the proper and strict sense of the word. Therefore, to be a Spinozist is actually to replace God the Father (who has no Son, incidentally) by Spinoza, while maintaining the notion of divine transcendence in all its rigor; it is to say that Spinoza is the transcendent God who speaks, to be sure, to human beings, but who speaks to them as eternal God. And this, obviously, is the height of absurdity: to take Spinoza seriously is actually to be—or to become—mad.

Spinoza, like Hegel, identifies Man (that is to say, the Wise Man) and God. It seems, then, that in both cases it could be said indifferently either that there is nothing other than God, or that there is nothing other than Man. Now in point of fact, the two assertions are not identical, and if the first is accepted by Spinoza, [121] only the second expresses Hegel's thought. And that is what Hegel means by saying that Spinoza's System is not a pan-theism, but an a-cosmism: it is the Universe or the totality of Being reduced to God alone, but to a God without World and without men. And to say this is to say that everything that is change, becoming, time, does not exist for Science. For if the Ethics is, in fact, concerned with these things, how or why they appear in it is not known.

With the use of our symbolic circles, then, the difference between Hegel's and Spinoza's Systems can be represented in the following manner:

Let us start with the theistic System. In its pure form, it is Plato's System. But in general it symbolizes possibility II (see Figure 13). For Aristotle, several small circles must be inscribed in the large circle to symbolize the relation of Eternity and Time (Figure 14); but these circles ought to have fitted together; in the end, there would again be the Platonic symbol with only one small circle. (That is to say: all truly coherent theism is a monotheism.) As for Kant, the same symbol can serve; but the small circle must be drawn with a dotted line, to show that Kant's theology has, for him, only the value of an "as if" (Figure 15). In short, the symbol of the theistic System is valid for every System that defines the Concept as an eternal entity in relation to something other than itself, no matter whether this other thing is Eternity in Time or outside of Time, or Time itself. But let us return to Spinoza. Starting with the theistic system, Hegel does away with the small circle (reduced beforehand, by his predecessors, to a single point): see Figure 16. Spinoza, on the other hand, does away with the large circle: see Figure 17.

Hence the symbol is the same in both cases: a homogeneous closed circle. And this is important. For we see that it is sufficient to deny that the Concept is a relation with something other than itself in order to set up the ideal of absolute—that is, circular—Knowledge. And indeed, if the Concept is related to another reality, an isolated concept can be established as true by adequation to this autonomous reality. In this case there are partial facts, or even partial truths. But if the Concept is revealed Being itself, it can be established as true only through itself. The proof itself no longer differs from that which has to be proved. And this means that the truth is a "System," as Hegel says. The word "system" [122] is not found in Spinoza. But the thing itself is there. Setting aside Parmenides, Spinoza is the only philosopher who understood that the principle of all or nothing is valid for Knowledge: either one knows everything, or else one knows nothing; for one sees that one truly knows something only by seeing that one knows everything. And that is why the study of Spinoza is so instructive, despite the absurdity of his point of view. Spinoza sets up the ideal of total, or "systematic," or "circular," Knowledge. However, his System is impossible in Time. And Hegel's whole effort consists in creating a Spinozist System which can be written by a man living in a historical World. And that is why, while admitting with Spinoza that the Concept is not a relation, Hegel identifies it not with Eternity, but with Time. (On this subject see the Preface to the Phenomenology, pp. i9ff.)

We shall see later what this means. For the moment, I want to underline once more that the symbols of both systems are identical. They differ only in their source (which is not seen in the drawing): doing away with the small or the large circle. And again, this indeed corresponds to the reality. It is understandable that a temporal Knowledge could finally embrace the totality of becoming. But it is not understandable that an eternal Knowledge could absorb everything that is in Time: for the simple reason that it would absorb us ourselves. It would be the absolute Knowledge of Bewusstsein, which would have completely absorbed Selbstbewusstsein. And this, obviously, is absurd.

I shall stop here. To know what the identification of the Concept with Eternity means, one must read the whole Ethics.

Let us proceed, or return, to Kant.
Kant agrees with Plato and Aristotle (in opposition to Parmenides-Spinoza and Hegel) that the Concept is an eternal entity, in relation with something other than itself. However, he relates this eternal Concept not to Eternity, but to Time.

We can say, moreover, that Kant defines the Concept as a relation precisely because he sees the impossibility of Spinozism (just as Plato had done to avoid the impossibility of Eleaticism). Perhaps he did not read Spinoza. But in the "Transcendental Deduction of the Categories" and in the "Schematismus" he says why the [123] Spinozist conception of Knowledge is impossible: it is impossible, because for us—that is, for man—"without intuition the concept is empty."

*11 Plato accepts this: the One is ineffable.

*12 Just as there are nontemporal movements, as Descartes correctly remarks. 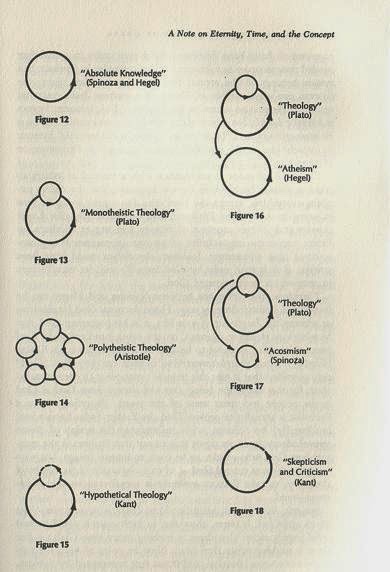