The play was more polemical than entertaining, not only indicting the rabbis for their fanaticism in persecuting the young freethinker but also suggesting, ludicrously, that this zealotry was fueled by a messianic fervor inspired by the belief that they were living in apocalyptic times, heralded by the “revelation” that Shabbetai Zevi was the messiah. (It was not until nine years after Spinoza’s banishment from Amsterdam that Zevi’s prophet, Nathan of Gaza, openly declared him to be the messiah.)

Beyond the use of Spinoza as a stick with which to beat the rabbis, Sloves greatly embellished Spinoza’s love life, deepening the tragedy of his ban by inventing a passionate affair between young Baruch of Amsterdam and the beautiful and virtuous Rochel — whose fictional grandfather pleads, to no avail, with the cabal of rabbis persecuting Spinoza for his liberal ideas to show mercy. Great Yiddish stage diva Ida Kaminska was cast in a leading role as Manuela, Rochel’s flamboyant, Portuguese-born mother whose disdain for the rabbis and contempt for the dry culture of Amsterdam’s Jews offers the play’s most memorable lines.

Among the four plays that never left the page for the stage, the most interesting by far was the three-act drama “Borukh Spinoza: Images of his Life” by Soviet Yiddish writer Meyshe Belenki. Like Sloves, Belenki presents Spinoza as the victim of religious intolerance, but his play remains far more faithful to both history and Spinoza’s philosophy, and includes some fascinating (and plausible) dialogues between Spinoza and his friends van den Enden and Ludwig Meyer.

What explains the temptation of five Yiddish writers to try their hand at rendering Spinoza’s life onstage? The oft-drawn and always far-fetched connection between Spinoza and Uriel d’Acosta — whose series of excommunications resulted finally in his tragic suicide when Spinoza was only 8 years old — may offer a clue. Unlike Spinoza, however, who never wrote about himself, d’Acosta left behind a heart-wrenching memoir. And unlike Sloves’s “Borukh fun Amsterdam,” which enjoyed only a very brief run, the Yiddish play “Uriel Acosta,” adapted from the popular 1846 German drama by celebrated dramatist Karl Gutzkow and starring the great Alexander Moissi in the title role, was a staple of the German Jewish, and later the Yiddish, theatrical canon for more than a century. According to an article in New York’s Daily Worker, Gustkow’s play was “as early as 1860, one of the major attractions of New York’s Stadt Theatre… which presented great German and other foreign stars in the best plays the world had to offer.”

In its several Yiddish versions, “Acosta” became a staple of New York’s Yiddish theater scene, featuring its finest talents. Its musical score was by the legendary Abraham Goldfaden, and the play launched the career of an incomparable Yiddish stage star, Jacob Adler, who called d’Acosta “my first great role” in his autobiography, as well as that of David Kessler, Adler’s main rival. In 1919, “Acosta” became the first major success of Moscow’s Yiddish State Theater, whose director, Alexander Granovsky, eventually also directed the Hebrew version of the play for Berlin’s Hebrew theater, Ha-Bimah, in 1930. In fact, “Acosta” was the very last Hebrew play staged in Germany before Habimah moved to Tel Aviv.

The tremendous, century-long successes of the various German, Yiddish and Hebrew productions of “Acosta” likely inspired hope in the five Yiddish playwrights who took him on, that Baruch Spinoza — often, and incorrectly, depicted as d’Acosta’s disciple — might also be a stage success. Though the reviews in the Yiddish press for Sloves’s play were polite, “Borukh fun Amsterdam” — the Yiddish Springtime for Spinoza — began in March 1961 and was over by May 1962. But, though Spinoza may have died prematurely on the Yiddish stage, he continued to enjoy a rich posthumous life in all the genres of Yiddish literature.
[By Allan Nadler] 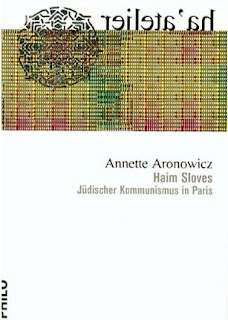 In late 1954 and early 1955, Haim Sloves, an Eastern European Jewish Communist living in Paris, wrote a play in Yiddish about Spinoza entitled Baruch fun Amsterdam. Its detractors dismissed it as Communist propaganda. And even its admirers fell short of considering it a great literary achievement. One of the favorable reviews came close to suggesting that the play would be better off without the character of Spinoza himself. Nonetheless, Baruch fun Amsterdam provides us with an entryway into the world of Eastern European Jewry not long after World War II. In particular, it gives us access to what it meant to be secular in this time and place. To capture this meaning, we shall proceed in successive waves. First, something needs to be said about Haim Sloves and why he chose to write a play about Spinoza. We shall then turn to the image of the secular Jew within the play itself. In a third section, we shall read the play against the events of the 1950s and 1960s, adding unexpected twists and dimensions to what being secular meant. Finally, we shall see how some of the formal elements of Baruch were in tension with some of its more explicit statements, complicating the image of the secular Jew yet more. Throughout, it will be my claim that in its portrayal of the modern Jew, this play raised...[Hier]

Khaim Sloves: (1905– 1988) A proletarian Yiddish playwright, Khaim Sloves was born in Bialystok where he received both a traditional education in kheyder as well as education in German schools, Russian schools, and a Yiddish folkshul. From early on, he showed a great interest in theatre and throughout childhood organized plays and performances. As a young man, he traveled throughout the Soviet Union before returning to Poland where he became involved in underground revolutionary politics, was arrested, and went on a series of hunger strikes. In 1926, Sloves emigrated to France and during the fascist regime, became involved in the French-Jewish Resistance movement, writing anti-fascist articles for illegal resistance publications. After the war, he continued to write plays that were performed in Yiddish-language theatres throughout eleven countries, as well as articles for Yiddish publications, and to edit a journal in French of his own founding to educate the assimilated Jewish youth of France about Yiddish language, literature and culture. [Van hier)