Charles Freeland: Variations on a Theme by Spinoza 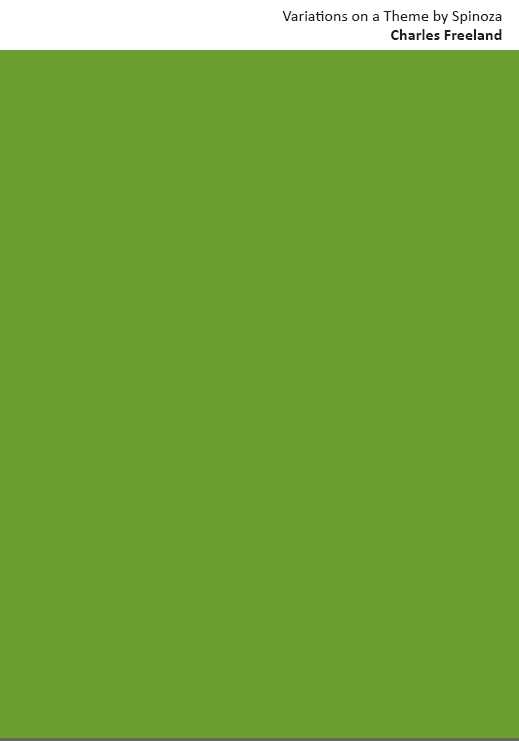 Variations on a Theme by Spinoza. A free e-chapbook from Red Ceilings Press. MMXI. To access, click on the image.

"In Charles Freeland's Variations on a Theme by Spinoza, the poet makes flesh the 16th-century philosopher's mind/body/emotions-as-divine issues for an audience familiar with the significance of `unguarded messages on the phone.' Fascinating parts - the piety of lust, an impartial, broken-hearted God - strive to equal the sublime oneness that consumed one of our greatest minds. Badass, but also a little lonely, no?" [Chris Vola, Deadly Chaps Press].

An emotion is a confused idea in that it arises from the mind but believes itself subject to the body. Any idea I have of a body arises not, per Spinoza, from the idea I have of my own body, but that I have of yours. The resulting emotion is no more idea than it is confused. If I remain passive before the emotion that is the memory of your body (and not the body itself) I do so only until such time as that memory is no longer just memory, but the fact of your body like the fact of my own.

Charles Freeland
is Professor of English at Sinclair Community College in Dayton, Ohio. Twice the recipient of the Individual Excellence Award in Poetry from the Ohio Arts Council, he is the author of a dozen books and chapbooks including Eucalyptus (Otoliths), Eros & (Fill in the Blank) (BlazeVox), Five Perfect Solids (White Knuckle Press). Variations on a Theme by Spinoza (The Red Ceilings Press MMXI - PDF)
His website is The Fossil Record (charlesfreelandpoetry.net).

You are minding your own business.
The movies, a wedding, a class
In economics. It doesn’t matter.
You are sober and satisfied.
Suddenly, you want to stand up
And say fuck fifteen times.
The impulse is as pointless and real
As any vision. You are the prophet
With live coals on his lips.
You manage to stay in your chair,
Let the movie out, the wedding be,
But you know your life is over.
You feel the urge to tell your wife
The babysitter looks damned attractive.
You almost shoot the neighbor’s dog.
There is no place to go, no big fish
To hide in. God, in His infinite sense
Of humor, has singled you out.
How close control is to something else.
You want to steal a bowling ball.
No one would get the point.
The prophet’s biggest problem is
God can be a little cryptic.
Throw food in a restaurant,
Call your boss an ugly drunk
And you are only crazy, no use at all.
So you stand around in silence.
People pass you on the street
And smile. You want to make bird noises.
You want to sit down in traffic,
Warn them how thin the line
Between living and lost control.
Between normal days and captivity.