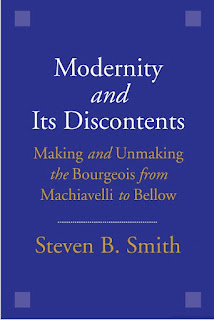 Steven B. Smith, Modernity and Its Discontents. Making and Unmaking the Bourgeois From Machiavelli to Bellow. Yale University Press, August 9, 2016 – books.google

Steven B. Smith examines the concept of modernity, not as the end product of historical developments but as a state of mind. He explores modernism as a source of both pride and anxiety, suggesting that its most distinctive characteristics are the self-criticisms and doubts that accompany social and political progress. Providing profiles of the modern project’s most powerful defenders and critics—from Machiavelli and Spinoza to Saul Bellow and Isaiah Berlin—this provocative work of philosophy and political science offers a novel perspective on what it means to be modern and why discontent and sometimes radical rejection are its inevitable by-products.

Aanvulling. Review door Christopher Atamian op 22 sept. 2016 in The Weekly Standard about this wonderfully erudite opus, nothing less than a short history and analysis of modernity itself. [Slechts deels te lezen]