Ik citeer daaruit deze alinea's: "Rabbi Soloveichek called Rembrandt’s portrayal of Moses with the Ten Commandments “profoundly Jewish.” To begin with, this Moses does not have horns, thus righting the mistaken interpretation and translation that had led Michelangelo to depict Moses with horns.  Moreover, these tablets follow the division of five commandments on each tablet, traditionally used by Jews — but in Rembrandt’s time, Christians generally placed four on the first tablet, and six on the second.  Then there is the Hebrew calligraphy, which is superlative, “almost like a Torah scroll.”

Acting as a self-described “amateur art sleuth,” Rabbi Soloveichek presented evidence he had gathered pointing to the probable source for this inscription: an Amsterdam shul that that no longer exists, and of which only two depictions remain, but which Rembrandt, or one of his students (one of whom was Jewish) almost certainly visited. This was the very same shul that had excommunicated Baruch Spinoza, Soloveichik commented, making it “more welcoming to Rembrandt and his student than to Spinoza.” Finally, the rabbi noted that while some call this painting the “shattering” of the tablets, he believes it depicts Moses restoring the tablets to the people of Israel — an interpretation to keep in mind as we contemplate the meaning of the High Holidays ahead." 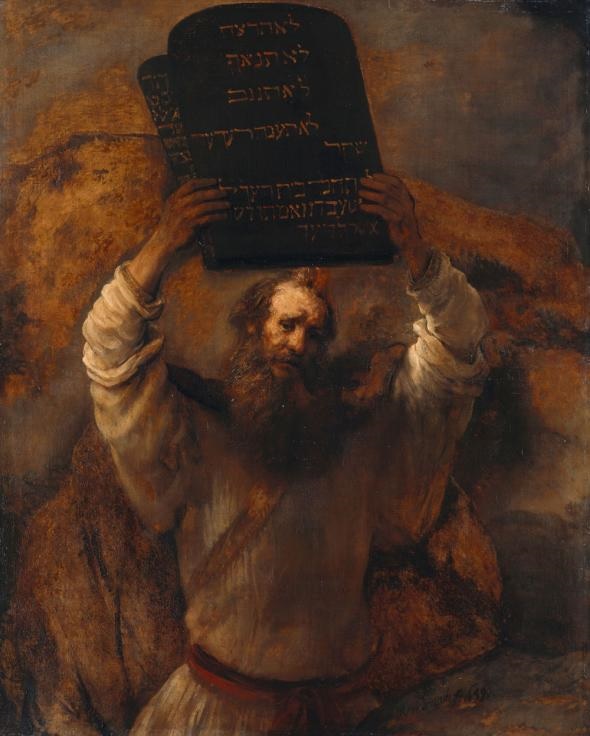