Lemma Spinosism in The Complete Dictionary of Arts and Sciences (1766)

Temple Henry Croker, Thomas Williams, & Samuel Clark (Eds.), The Complete Dictionary of Arts and Sciences, in which the Whole Circle of Human Learning is Explained, and the Difficulties attending the Acquisition of Every Art, Whether Liberal or Mechanical, are Removed, in the Most Easy and Familiar Manner. London, Vol I, 1764, Vol II, 1765, Vol III, 1766 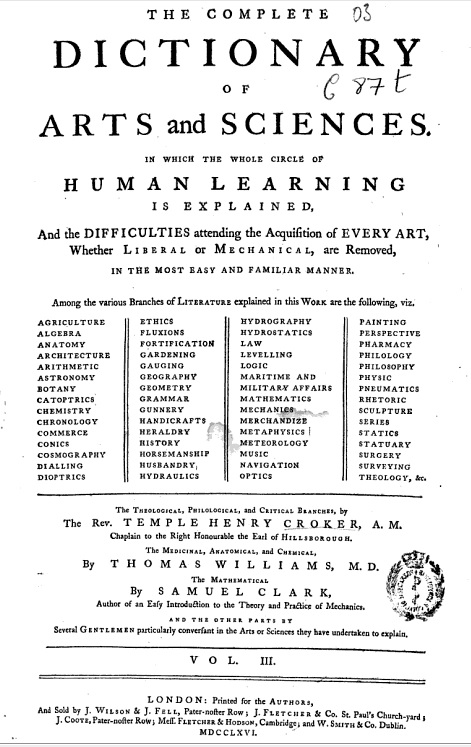 SPINOSISM the doctrine of Spinosa; or atheism and pantheism, proposed after the manner of Spinosa.

Benedict Spinoza, or Espinoza, was a man well known in Holland. He was born a Jew at Amsterdam, but did not make profession of any religion, either the Jewish or Christian. - He composed several books in Latin; the most celebrated whereof is his Tractatus Theologico Politicus, wherein he endeavours to overturn the foundation of all religion: the book, accordingly, was condemned by a public decree of the states; though it since been sold publicly, and even reprinted, both in Latin and French, in that country, and lately in English London.

Spinoza, here, insinuates, that all religions are only political engines, calculated for the public good; to render the people obedient to magistrates, and to them practise virtue and morality.

He does not here lay down his notion of the Deity openly, but contents himself with suggesting it. – In his Ethics, published among his posthumous works, he is more open and express, maintaining, that God is not as we imagine him, an infinite, intelligent, happy, and perfect being; nor any thing, but that natural virtue, or faculty, which is diffused throughout all creatures.

Spinoza, in his Tractatus above mentioned, is full on the subject of the authors of the scriptures; and endeavours to shew, that the Pentateuch is not work of Moses, contrary to the common opinion, both of the Jews and Christians. He has also his particular sentiments, as to the authors of the other books. - This part of the work has been answered by M. Huet, in his Demonstratio Evangelica: and by M. Simon, in his Hist. Crit. du Vieux Test.

Spinosifm is a species of naturalism, or pantheism or hylotheism, as it is sometimes called, that is, of the dogma which allows of no other God but nature, or the universe, and, therefore makes matter to be God. Accordingly, Buddeus, in a dissertation De Spinozismo ante Spinozam, proves at large, that Spinoza's doctrine of God and the world is far from being his own invention, but that it had been held by many philosophers of different sects, both among the Chaldeans and Greeks. It is certain, the opinion of the Stoics, and those who held an anima mundi, was not far from it. Lucan introduces Cato discoursing thus:

Strato likewise, and others among the Peripatetics, maintained something very like it; and what is more, though no ancient sect seems farther removed from Spinosifm than the Platonic, as they attributed the greatest freedom to God, and carefully distinguished him from matter; yet Gundlingius has proved at large, that gave matter much the same origin with Spinoza. But the sect that approached nearest to Spinosifm was which taught that all things were one, as Xenophanes the Colophonian, Parmenides Melissus, and especially Zeno Eleates, whence it obtained the name of the Eleatic system of atheism. To the same may also be reduced the opinion of those who held the first matter for God, as Almaricus and David of Dinantum. Add, that the sect of Foe in China and Japan, that of the Soufi in Persia, and that of the Zindikites in Turky, are found to philosophise much after the manner of Spinoza.

The chief articles in Spinoza's system are reducible to these: That there is but one substance in nature, and that this only substance is endued with an infinite number of attributes, among which are extension and cogitation. That all the bodies in the universe are modifications of this substance considered as it is extended, and that all the souls of men are modifications ot the same substance, considered as cogitative. That God is a necessary and infinitely perfect being, and is the cause of all things that exist, but is not a different being from them. That there is but one being and one nature; and that this nature produces, within itself, by an immanent act, all those which we call creatures. And that this being is at the same time both agent and patient, efficient cause and subject, but that he produces nothing but modifications of himself.

Thus is the Deity made the sole agent as well as patient in all evil, both physical and moral; that called malum pœnae as well as malum culpae: a doctrine fraught with more impieties than all the heathen poets have published concerning their Jupiter, Venus, Bacchus, &c. What seems to have led Spinoza to frame this system, was the difficulty of conceiving either that matter is eternal, and different from God, or that it could be produced from nothing, or that an infinite and free Being could have made a world such as this is. A matter that exists necessarily, and which nevertheless is void of activity, and subject to the power of another principle, is an object that startles our understanding; as there seems no agreement between the three conditions. - A matter created out of nothing is no less inconceivable, whatever efforts we make to form an idea of an act of the will that can change what before was nothing into real substance. Besides, its being contrary to that known maxim of philosophers, Ex nihilo nihil fit. In fine, that an infinitely good, holy, free Being, who could have made his creatures good and happy, should rather choose to have them wicked, and eternally miserable, is no less incomprehensible; and the rather, as it seems difficult to reconcile the freedom of man with the quality of a being made out of nothing.

These appear to have been the difficulties which led Spinoza to search for a new system, wherein God should not be distinct from matter, and wherein he should act necessarily, and to the extent of all his power, not out of himself, ad extra, but within himself. But it is certain, if the new system rescue us from some difficulties, it involves us in others much greater. For,

If it be objected, that Spinoza does not consider different bodies as different parts of extension, but as different modifications of it; the distinction between part and modification, we doubt, will hardly save him. For let him avoid the word part as much as he pleases, and substitute that of modality or modification for it, the doctrine will amount to much the same: the characters of diversity are not less real and evident, when matter is divided into modifications, than when it is divided into parts. The idea of the universe will still be that of a compound being, or an aggregate of several substances.

For proof of this, it may be observed, that modalities are beings which cannot exist without the substance which modifies them; whence it follows that the substance must be found where ever its modalities are found; and even that the substance must be multiplied in proportion as the number of incompatible modifications multiplied: so that, where-ever there are five or six of these modifications, there must be five or six substances. It is evident, that a square figure and a circular are incompatible in the same piece of wax. Whence follows, that the substance modified by the square figure cannot be the same substance with that modified by round figure. So, when I see a round and a square table in a room, I may safely assert, that the extension which makes the subject of the round table is a distinct substance from the extension which is the subject of the square table: since otherwise it would follow, that the square and round figures, might be found in the same subject at the same time. - The subject therefore, that is modified by two figures, must be two substances.

2. If it be absurd to make God extended, as this robs him of his simplicity, and makes him be composed of parts; it is still worse to reduce him to the condition matter, the lowest of all beings, and that which most of the ancient philosophers ranked immediately above nothing: matter! the theatre of all sorts of changes, the field of battle of contrary causes, the subject of all corruptions and generations; in a word, the being most incompatible with the immutability of the Deity!

The Spinosists, indeed, maintain, that it is not susceptible of any division; but the argument they alledge, in proof of it, we have elsewhere shewn to be false: it is, that for matter to be divided, it is necessary that one of the parts be separated from the other by a void space, which is impossible: since there is no vacuum in nature.

3. If Spinosism appear extravagant, when we consider God as the subject of all the mutations, corruptions, and generations in bodies; it will be sound still worse, when we consider him as the subject of all the modifications of thinking. It is no small difficulty to unite extension and thinking in the same substance; since it is not an union like that of two metals, or of water wine, that will serve the purpose: these last require juxta-position; whereas to combine thinking and extension requires an identity; thinking and extended are attributes identified with the substance; and consequently are indentified with each other, by the fundamental rule of all logic.

Again, when we say, that a man denies this, affirms that, likes that, &c. we make all those attributes fall on the substance of his mind, not on his thoughts, which are only accidents or modifications of it. If therefore what Spinoza advances be true, that men are modalities of God, it would be false to say, ‘Peter denies, likes, wills,’ &c. since, in reality, on this system, it is God that denies, wills, &c. and consequently all the denominations which arise from the thoughts, desires, &c. of men, fall properly and physically on the substance God. From whence it also follows, that God affirms and denies, loves and hates, wills and not wills the same thing, at the same time, and under the same conditions, contrary to the great principle of reasoning: Opposita sunt quae & neq; de se invicem, neq; de eodem tertio secundum idem, ad idem, eodem modo atq; tempore vere affirmari possunt; which must be false, if Spinosism be true: since it cannot be denied but some men love and affirm what others hate and deny, under all the conditions expressed in the rules.

4. But, if it be physically absurd to say the same subject is modified at the same time with all the different thoughts of all men, it is horrible when we consider it in a moral light. Since it will follow, that the infinite, the all-perfect Being is not constant, is not the same one moment, but is eternally possessed even with contrary passions; all the uniformity in him, in this respect, will be, that for one good and wise thought he will have twenty foolish and wicked ones. He will not only be the efficient cause of all the errors, iniquities, and impurities of men, but also the passive subject of them, the subjectum inhaesionis. He must be united with them in the closest manner that can be conceived, even by a penetrative union, or rather an identity, since the mode is not really distinct from the substance modified.

Several have undertaken to refute Spinoza’s doctrine, particularly the learned Dr. Clarke; we have also an examination of Spinosism, and Mr. Bayle's objections against this system, by Mons de Jariges, in the Mem. de l’Acad. de Berlin. Wolfius has also given a refutation of Spinoza, in his Theol. Nat. Part 2.