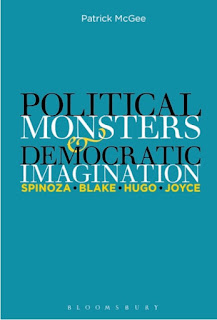 Political Monsters and Democratic Imagination explores the democratic thought of Spinoza and its relation to the thought of William Blake, Victor Hugo, and James Joyce. As a group, these visionaries articulate: a concept of power founded not on strength or might but on social cooperation; a principle of equality based not on the identity of individuals with one another but on the difference between any individual and the intellectual power of society as a whole; an understanding of thought as a process that operates between rather than within individuals; and a theory of infinite truth, something individuals only partially glimpse from their particular cultural situations. For Blake, God is the constellation of individual human beings, whose collective imagination produces revolutionary change. In Hugo's novel, Jean Valjean learns that the greatest truth about humanity lies in the sewer or among the lowest forms of social existence. For Joyce, Leopold and Molly Bloom are everybody and nobody, singular beings whose creative power and truth is beyond categories and social hierarchies.

Preface
Chapter 1. The Power of Thought, or Spinoza after Negri and Badiou
Chapter 2. Imagination as Thought in Blake’s Milton
Chapter 3. The Savage God of Hugo's Les Misérables
Chapter 4. The Amorous Production of Being in Joyce's Ulysses
Conclusion, Bibliography, Index

Patrick McGee is Professor Emeritus of English at Louisiana State University, USA. He currently lives in Seattle, Washington, where he continues his research and writing. He is the author of eight books, including Cinema, Theory and Political Responsibility in Contemporary Culture (1997), Joyce beyond Marx: History and Desire in "Ulysses" and "Finnegans Wake" (2001), and Theory and the Common from Marx to Badiou (2009).