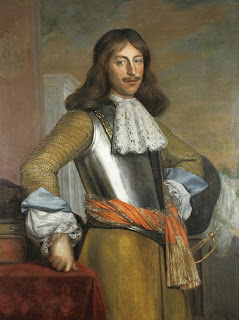 Serendipity at the Clark:
Spinoza and the Prince of Condé

The Clark Library is justly renowned for its rich collection of English books printed between 1640 and 1750. Some think that since this is its main holding, there is little that is of interest for topics outside the English scene. Given the concentration of books printed in England, the Clark has some, probably many, that scholars would not normally consult because they are translations of well-known works printed on the Continent and obtainable in the original form at UCLA, the Huntington, USC, or elsewhere. However, when one is at the Clark and suddenly needs information about a continental European matter, one uses what resources are at hand. Sometimes this leads to astonishing results.

One day in 1982 I wanted to check something about the diplomatic and marital negotiations between Queen Christina of Sweden and the Prince of Condé, the second ranking nobleman in France. The Clark has little literature on either of these figures, but it does have the 1693 English translation of Pierre Coste’s The Life of Lewis ofg Bourbon, Late Prince of Condé. I ordered the volume and quickly ascertained that it contained no mention of the prince's relations with the queen. But before returning it and heading for UCLA’s Research Library, I looked it over, and on page 175 of book 6, in an account of the prince's military ventures in the Netherlands, I found a startling bit of news.

The Prince of Condé had led the French invasion of the Netherlands in 1672 and established his headquarters in Utrecht. In May of 1673 he became sick and had to stay in bed. He invited the most learned men of Utrecht to talk to him. Then, the text relates, "It is reported that he was desirous to see Spinoza, and told him smiling, That if he would follow him into France, he would put him in a way to live conformably to the Principles of his Theology; that Paris neither wanted fine Women, nor Pleasures; although he look'd upon him as a Deist, and a Man who had no Religion, he was charm'd with the Conversation he had with him." 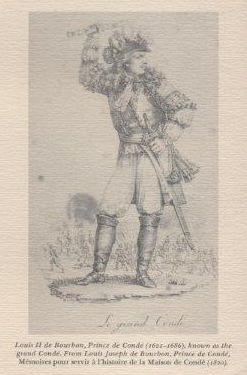 Anyone who has taught or been taught about Spinoza knows that Spinoza is invariably portrayed as a man who was not interested in worldly affairs. One story is always used as a case in point: Spinoza was sent for by the Prince of Condé, who wanted to meet him. Spinoza went to Utrecht but found the prince was not there. He waited for a few days and then returned home without having seen him. In the traditional story, the prince's minions told Spinoza he might get a good pension if he dedicated a book to Louis XIV, but Spinoza had no interest. The story is cited in the Spinoza literature over and over again to show Spitnoza’s special moral character, that he was above worldly. temptations.

And here in a volume at the Clark, I read that Spinoza met the prince and find what purports to be a quotation of the prince's words to him.

I looked in the preface to see where Coste got his information for the biography. He said he received the assistance of people who had served with the prince or had access to Condé’s archives at his palace at Chantilly. Pierre Coste was a pretty substantial character. He was a leading Huguenot who became John Locke’s secretary and translator. So he was not one likely to invent material.

Intrigued by this news, that Spinoza had met the Prince of Condé, I took two steps—one, I wrote a friend in London asking her to check if the same text appeared in the French original; and two, I looked in UCLA's collection at the seven-volume history of the house of Condé 1885-96) by the duc d'Aumale, the last nobleman to live at the Château de Chantilly. In Volume 7 the duke reported the story that the Prince of Condé had been sick in Utrecht, sent for Spinoza, had several talks with him, and wanted to take the philosopher back to France with him but that Spinoza declined to go. The duke indicated that his source for this account, as for most of the other material in his seven volumes, was 'les Archives de Condé” at Chantilly, which he had been going through for forty years. But no specific reference was given.

My informant in London wrote that the original French text by Coste said only that Condé wanted to see Spinoza and arranged to have him come from The Hague so that he could talk with him. No quotation from the prince appears. The source given for Coste’s information is a work of 1675 by Jean Brun, a Dutch pastor, written in response to an attack on the Dutch by one of Condé’s officers, a Colonel Stoupe. Stoupe, to justify the French invasion of Holland, claimed that Holland was a religious madhouse, willing to put up with any heretic, even one Benedict Spinora. Stoupe then summarized both Spinoza's public and his private views. He criticizedl the Dutch theologians for not having published any answer to Spinoza’s Tractatus Theologico-Politicus of 1670. Brun, in answer, mentioned that Stoupe was a friend of Spinoza's and that Stoupe was the one who had arranged for Spinoza to come to Utrecht to talk to the Prince ol Condé.

So Coste knew Brun's version. But where did the English translator get a quotation of what Condé said to Spinoza, and why have all Spinoza scholars accepted the story that the two never met? Answering these questions has taken me to the Châeau de Chantilly, to the British Library and to The Hague, and has opened up a whole new perspective on Spinoza.

I checked and found that the Life of Conde was Costes first publication, considered important enough to be reprinted for fifty years. It was translated by Nahum Tate, who had been appointed poet laureate in late 1692. Right after his elevation to the office, Tate wrote an ode on the New Year and birthday odes to Queen Mary and King William—and translated five hundred pages of Coste's Life of Conde! So the work must have been of some import in England at the time, and Tate must have had some source of information that Coste did not with Spinoza. Some have claimed that Saint-Évremond, who eventually resettled in England, was the most influential in disseminating Spinoza', views there as well as in France.

Several Huguenot refugees from Condé’s entourage ended up in England after the revocation of the Edict of Nantes in 1685. One of them, Condé’s doctor, told Desmaireaux that he had seen Spinoza go into the prince’s chamber day after day. Another physician then living in England, one Dr. Henri Morelli, a friend of Saint-Évremond’s, had also been a close friend of Spinoza at the time of the meeting and was able to supply details about it. Desmaizeaux put into the notes to a fake letter of Bayles* the testimony of these people. Desmaizeaux had gotten Dr. Morelli to write out exactly what the Prince of Condé offered Spinoza. (Morelli said Spinoza told him the details of his visit to the prince over and over again.) The prince would make Spinoza part of his court, would protect him, house and feed him, and give him a pension of one thousand écus. Motelli said Spinoza turned this down because he was afraid that not even the great Prince of Condé, could protect him from the bigots in Paris. (Condé was the protector of quite a few people of dubious religious views, including Molière and Isaac de Ia Peyrère.)

Dr. Morelli could well be the source of Tate’s version. Information about him may open up new perspectives on Spinoza. Morelli was close to Saint-Évremond, who wrote poems about him and gave us his biography. He was a Spanish Jew. Henriquez Morales, from Cairo, who studied medicine In Italy and Holland. He became Saint-Évremond’s doctor; then the doctor of Saint-Évremond’s girlfriend, the eminent French courtesan Ninon de l’Enclos; and then of the Countess of Sandwich, daughter of the notorious Earl of Rochester. Saint-Évremond tells us that Morelli was a great libertine who wrote poetry in at least eight languages. In one of his own poems, Saint-Évremond has Morelli singing the praises of Spinoza´s views. Morelli lived in England from the late seventeenth century until death in 1712. As the doctor of an important aristocratic English family, as the friend of the famous libertine poet Saint-Évremond, and as a poet himself, he would presumably have been acquainted with England’s poet laureate.

Morelli is also of interest in that he is unknown in the Spinoza literature and would, if Desmaizeaux’s information is accurate, be one of only two or three Jews who were friendly with Spinoza after his excommunication. Morelli was the only person who knew the identity of the French translator of Spinoza's Tractatus, and it is this translation that made Spinoza renowned posthoumously as an atheist (Tomt Paine, for example, read Spinoza in the French a century later).

So from the passage in Tate’s translation of the Life of Conde, I was led through the whole history of the Condé-Spinoza story. By now I am convinced that Spinoza covered op the meeting for political reasons: his followers, to save his honor. Those who knew of the meeting, the French Protestant libertines around Condé (including Colonel Stoupe), plus Dr. Morell,. are part of a milieu we previously knew nothing of in Spinoza’s life story. And it is these people who spread Spinoza’s views through the French translation of them.

For me the affair is stil going on. I have found Dr. Morelli’s footsteps, a letter from Morelli to Hans Sloane showing that Morelli was an important contact between Dutch and English medical doctors. I have found that Desmaizeaux tried to publish an “Éloge” of Spinoza after getting Morelli's data but that the Huguenot printer in Holland refused to print it because he detested Spinoza’s views. (He had refused to print the French translation of the Tractatus earlier.) The printer's letters are supposed to be in Paris and need to be examined. Pierre Coste, with whom the story began, carried Desmaizeaux’s “Éloge” from England to Holland and gave it to the printer. If the “Éloge” can be found it may finally reveal the whole story and show the importacnce of the Spinoza Condé meeting, namely, that the meeting put Spinoza into a group of French Protestant libertines in Condé’s entourage, who, along with Dr. Morelli, made him the hero of the Enlightenment. Without the opening clue from the Clark’s copy of Coste’s Life of Conde, I would never have looked into the story. Now that I have gotten this far, I can see that the hagiography that constitutes Spinoza's biography has to be reexamined and that we have to explore whole new intellectual environments where Spinoza and his ideas flourished to understand the man and his influence. 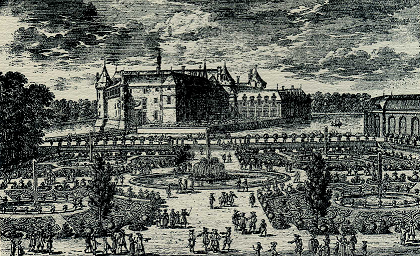 Château de Chantilly during the seventeenth century. Now a national museum, it still houses the Condé family archives and art collections. From Louise M. Richter, Chantilly in History and Art (1913) [illustratie in artikel]

Serendipity at the Clark: Spinoza and the Prince of Condé." In: The Clark Newsletter, University of California, Los Angeles, n°10 Spring 1986, p. 4-7

hi
i,m phd student and my dissertation is about spinoza.but i have no accessibility to the Gebhardt edition of Spinoza's works.
i want to know how can i find this editions iv internet,.
thank you very much

Find the Gebhardt edition here on a Russian site
http://spinoza.xclan.ru/

thank you very much Dear Stan...