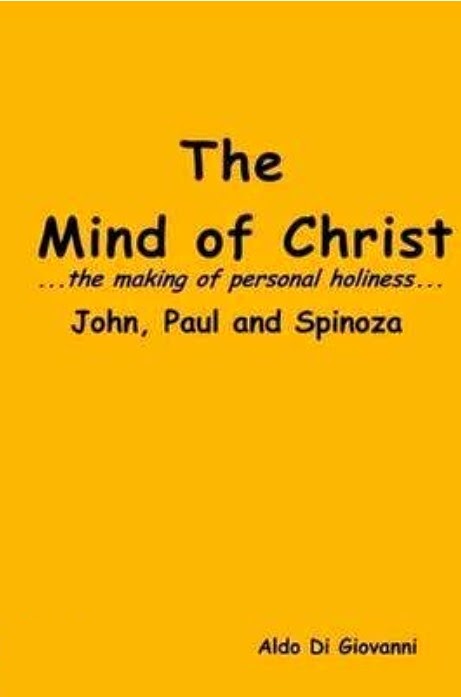 [Blurp] This work has been prepared for young people driven to spiritual matters by life and death struggling. It should be of interest to others who feel that spiritually they do not have enough to be alive meaningfully. The New Testament book of John, Paul's authenticated letters and Spinoza's works have much to reveal to serious readers. Their messages of discerning and engaging God enable and empower people who earnestly and deeply pursue personal salvation and holiness.

The booklet promises revealing insight to the reading and study of John, Paul and Spinoza, but it may not be for everyone ... it is not light reading.
The central message in the book of John, the authenticated letters of Paul and the work of Spinoza is that what is important about personal existing and living is to personally be in God of and from God. Spinoza closed his last and most important work the Ethic by writing:

"... the wise man... being conscious by a certain eternal necessity of himself, of God, and of things, never ceases to be, and always enjoys true peace of soul. If the way which, as I have shown, leads hither seems very difficult it can never the less be found... if salvation lay ready to hand and could be discovered, without great labour, how could it possible that that it should be neglected by almost everybody? But all noble things are as difficult as they are rare." (Ethic, Pt5Prop42Sch.)

Paul did not 'neglect' his personal salvation. Through difficult pursuit, he discovered that 'eternal necessity of himself, of God and of things". In his letter to the Galatians, Paul writes that he spent 17 mature years in pursuit of discerning personal salvation and holiness. Those 17 years were not taken up with a focus on abstract theology or philosophy. Given his results and outcomes, they were taken up by God. According to the book of John, in all their lives, including 3 years of 24/7 discipleship, the disciples never once asked for anything in the 'name of' Christ (John 16:24). Yet all they had to do (or we have to do) is ask in the 'name of' Christ and all that is ultimately significant, meaningful or purposeful is given to us personally. Still, according to Paul's letter to the Galatians, Paul asked for 17 years... and God was faithful to complete him.

The Way, the Truth and the Light (John 14:6) are not made up of words, of images, or of abstract reasoning. In experience of reality, they are without words, images or abstract reasoning. Existentially experience of following the Way, knowing the Truth and seeing with the Light is not in having sophisticated words, not in having sacred cognitive or emotive images, and he experiences are reasoned.

While the way of salvation may be "difficult", "it nevertheless can be found" and be existentially affirmed by anyone whose person is in God of and from God, to the eternal enjoyment of their "true peace of soul". This booklet attempts to explicate and address that primary core message in John, Paul and Spinoza.

“Mine is an early 17th Century radical protestant or rather radical Christian approach to Christ that combines with a mid-twentieth century Salvationist's understanding of the 'Living' and written Gospels. Into the mix is added a Methodist appreciation for experience and Light within, likely derived from that 17th century radical protestant legacy.

My understanding is of a practical Quaker and mid-twentieth Salvationist theology. My approach to the Gospel is direct and plain. In my experience, Salvation Army soldiers I have met, as well as many other simple souls illuminating God's light before me, had a direct and plain grasp of the Gospel of Christ, its intuitive theology and doctrine. I found in them, what God reveals to me in my heart and in my mind. No doubt my development within the Catholic Church in childhood has also influenced me.

Much of what I know, I know because others before me lived lives of great concern in regards to the spiritual things of God. Others constructed places of worship and gathering. They showed their justice, righteousness and mercy and in doing or being pious. In so doing they illuminated my way. Needless to say, there has been much study and learning given over to the 'grist in the mill' of my understanding. In the end, I am a child of my age, within its traditions, speaking to the present and perhaps the future.

In the reflection, the Gospel plain and deep within has guided me in the past. God indwelling forming me according to Christ after the spirit guides me now and will guide me in the future.”