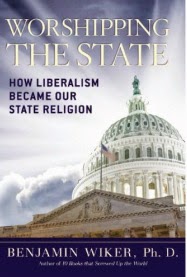 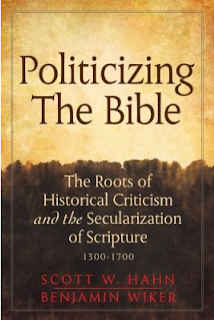 Bij Amazon is al te lezen: Resisting the typical, dry methods of contemporary scholarship, this powerful examination revisits the biblical days of life-and-death conflict, struggles for power between popes and kings, and secret alliances of intellectuals united by a desire to pit worldly goals against the spiritual priorities of the church. This account looks beyond the pretense of neutrality and objectivity often found in secular study, and brings to light the appropriation of scripture by politically motivated interpreters. Questioning the techniques taken for granted at divinity schools worldwide, their origins are traced to the writings of Machiavelli and Marsilio of Padua, the political projects of Henry VIII, Thomas Hobbes, and John Locke, and the quest for an empire of science on the part of Descartes and Spinoza. Intellectual and inspiring, an argument is made for bringing Christianity back to biblical literacy.

To understand more fully how the affirmation of religious liberty, or more exactly, the right to believe whatever one wants, was designed as a strategy of divide and conquer we’d have to go back beyond Jefferson and Madison to Benedict Spinoza, the great 17th century radical Enlightenment thinker.

It’s beyond the scope of this article to delve deeply into Spinoza, but as an overview we can say the following. Spinoza was one of the first great modern freethinkers, an atheist or a pantheist (depending on how one cashes out his assertion that “God is nature, and nature is God”). In either case, he was a devout enemy of Christianity and his own Judaism, devoted to his own reason against the dictates of any revealed religion because the latter (so he believed) was derived from the foolishness of irrational superstition.

The great problem for Spinoza was what has been called the theological-political problem: tersely put, in all societies the many religious fools lord it over few enlightened philosophers. This was the problem he set himself out to solve in his famous Theological-Political Treatise.

His solution, as you may have guessed, was to assert the absolute right by nature of everyone to believe anything he wants. Or to put it in its proper political setting—and here we note that Spinoza is rightly held to be the father of modern political liberalism—each person has the natural right to believe whatever he wants as long as he is publicly law-abiding. Belief is private; morality is public. One has the right to believe anything one wants about God, as long as one behaves (and especially ceases to bother others about their beliefs).

Spinoza’s solution had a two-fold, intended effect. First, it flattered the “fools” by ascribing to each one of them the extraordinary right to define God as they each saw fit. Second, it shieldedSpinoza himself, an atheist or pantheist, from public persecution by Christians. In the liberal state as he defined and designed it, Spinoza, too, had the absolute right to define his own beliefs.

But to return to our previous point, the affirmation of this right would effectively multiply the number of different beliefs accordingly. The more deeply each person affirmed his own right to define his own religion, the more religions there would be. The more individually-constructed religions, the more each would consider it essential to protect this right, thereby empowering the liberal state to ensure that each person’s private beliefs were protected from assault by others’ beliefs. The ultimate result, after some churning, would be a secular, liberal state, one defined by no one’s beliefs and hence by unbelief. Played out in this way, Spinoza’s atheism becomes the default “belief” of the liberal state. Or, we might say, unbelief has become the established belief, the established religion.

Jefferson and Madison are, arguably, heirs to that strategy, although as Deists their established belief was gotten as the result of the subtraction of Trinitarianism leaving the remainder of Unitarianism. Not as radical as Spinoza, but leaning in that direction. Historically, our liberal state has now gone beyond the wan Deism of these founders, and is pushing toward the complete secularist unbelief that has already been firmly established in Europe’s liberal democracies. Spinoza won out." [Hier de hele column]