libretto by the composer


The Loevendie is a Dutch composer. His musical career began in the Amsterdamse Postharmonie wind band, in which he played the clarinet. He soon started composing for bands which he formed with friends, in a jazz idiom inspired by the music of Benny Goodman, and later Parker, Gillespie and Ellington; he subsequently began to play the alto saxophone. After completing his military service he became a professional musician, formed his own quintet and gave concerts in night clubs. As a member of an international light orchestra, he travelled in the early 1950s to Turkey, where he acquired a lifelong fascination for Turkish folk music. Back in the Netherlands he decided at the age of 25 to enter the Amsterdam Conservatory, where he studied with Mulder and Orthel (composition) and Ru Otto (clarinet). He became active in improvised music, and as the leader of the Boy Edgars Big Band and later of his own Theo Loevendie Consort, he developed in the 1960s into one of the most successful Dutch jazz musicians, gaining an international reputation.
After his début as a composer in 1969 with Scaramuccia for clarinet and orchestra, Loevendie gradually emerged as a leading Dutch composer. He became a lecturer at the conservatories of Rotterdam (theory and composition) and Amsterdam (composition) and in the 1970s organized informal but influential STAMP concerts (Foundation for Alternative Music Practice), in which widely differing musical genres were presented on the same evening. He received many prizes, including the Koussevitzky Award for Flexio, the Matthijs Vermeulen Prize for Naima and the 3M Prize for his entire output. He has also been active in an administrative capacity: first as chairman of the GeNeCo (Society of Dutch Composers) and then as chairman of the Fonds voor de Scheppende Toonkunst.
Loevendie's late entry (at the age of 38) into the world of composed serious music with Scaramuccia was in part due to the lack of affinity he felt with the rigid intellectual aspects of serialism which, in the 1960s, governed the musical thinking of younger Dutch composers. He regarded serialism as 'an excess of rationalism' which did not offer him any points of contact. In Scaramuccia he contrasted this with music which excelled in polyrhythmic flexibility, a predilection for melodic and rhythmic ostinato motifs and a view of harmony and timbre which owed something to French music; the influence of Stravinsky was also important. Loevendie was not entirely insensitive to the prevailing musical fashions: for example, the spatial arrangement of the musicians in Orbits (1976) for solo horn and orchestra cannot be viewed in isolation from Stockhausen's Gruppen; and the construction of the earlier Aulos (1972), in which the performers are given freedom in the choice of pitch, has aleatory characteristics, although in Loevendie's case a link with improvised music is more logical. The influence of jazz is also clearly apparent from the mid-1970s on. In Strides (1976) the hypnotic repetitions of notes characteristic of Loevendie are integrated with reminiscences of the style of Fats Waller's Harlem stride piano, and in Bons (1991) an improvising soloist (preferably with demonstrable jazz credentials) is set against a chamber ensemble playing fully written-out parts. 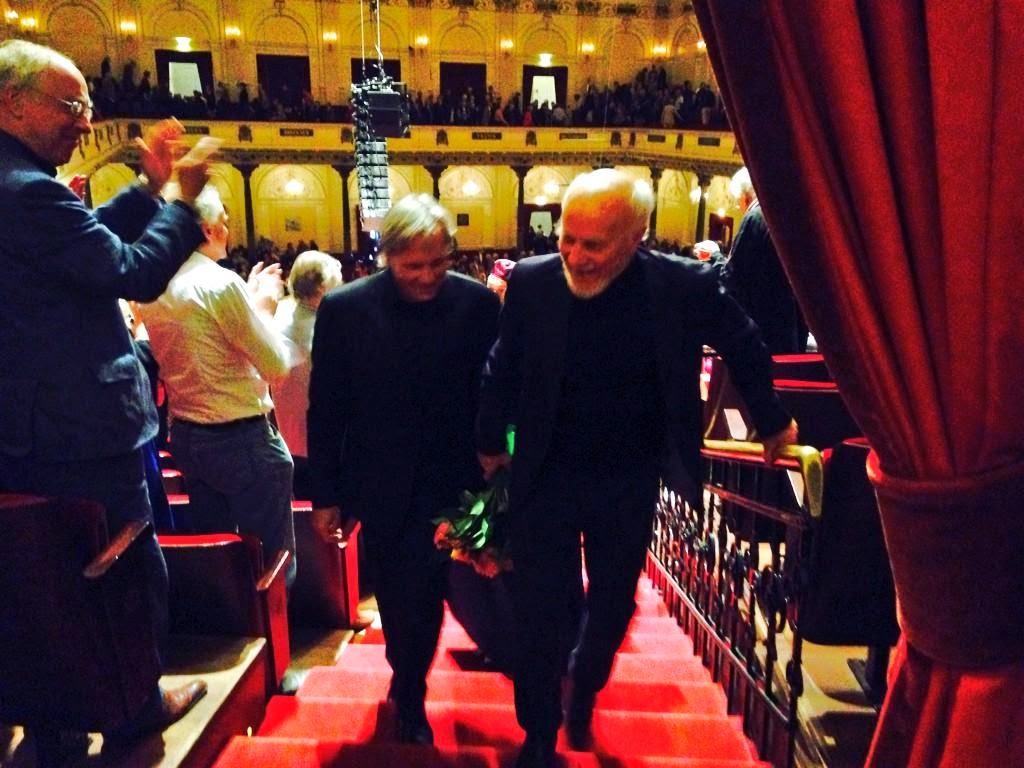 Theo Loevendie applauded after world pr of his The Rise of Spinoza [cf.]