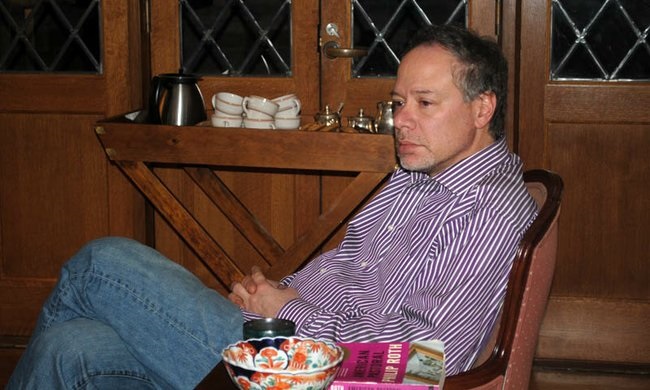 A review, by Peter Berkowitz, of Spinoza, Liberalism, and the Question of Jewish Identity, by Steven B. Smith (Yale University Press) This compelling book rescues Baruch (Benedict) Spinoza's Theologico-Political Treatise (1663) from undeserved obscurity. The only one [sic] of the Dutch philosopher's works to be published during his lifetime (1632-77), the Treatise reflects the influence of the new philosophy and method of Descartes, as well as Spinoza's meditation on his experience as a descendant of of Jewish refugees from the Spanish Inquisition who found himself excommunicated from the Jewish community of Amsterdam for his unconventional beliefs. As painstakingly reconstructed by Smith, a political scientist at Yale University, the Treatise is shown to contain both a far-reaching critique of traditional Judaism and a powerful argument for a democratic republic in which toleration and liberty of thought exist for all.

Smith claims that Spinoza's Treatise defined a critical challenge to modern liberalism: reconciling the Enlightenment's universalist aspirations with the reality of human difference. It was Spinoza, Smith argues, who set the terms for the later debate (involving such seminal figures as Moses Mendelssohn, Gotthold Ephraim Lessing, Kant, and Hegel) about the conditions under which Jews should be granted the full rights of citizenship. That debate shaped classic liberalism's account of how a modern state grounded in recognition of the natural freedom and equality of human beings should deal with minorities.

In addition to being a religiously based vindication of individual liberty, the Treatise is a politically inspired challenge to religion. Spinoza sought to emancipate his fellow Jews from what he regarded as the back-breaking burden of religious tradition. To this end, he scrutinized the Hebrew Scriptures as a human book, offered withering criticism of miracles and the idea of particular providence, and reinterpreted the Mosaic law as a merely political and long-superseded body of legislation. His goal was to lay the foundations for a secular state that would be home to autonomous individuals who bowed to no authority save that of reason. Today the Enlightenment political project raises concerns about the rise of rank individualism, the deterioration of the family, the appearance of the naked public square, and the breakdown of community. The autonomous individual in whose name Spinoza wrote now seems adrift rather than self-directed, enervated rather than emancipated. This problem, in Smith's view, is inseparable from Spinoza's legacy. Smith does not presume to resolve the dilemmas of contemporary liberalism or pass final judgment on what the Enlightenment has wrought. But he does offer a searching exposition of what was overthrown and what was built, what sacrificed and what gained, by the theological-political revolution Spinoza championed.

Spinoza: The first secular Israeli While "Who is a Jew?" is the foremost question relating to Jewish identity in Israel, the American Jewish community is intensely debating the question of "What is Judaism?" Steven Smith, a professor of political science at Yale University, addresses this issue in the same way as many other intellectuals, but from a unique vantage point: Baruch Spinoza's "Tractatus Theologic-Politicus," a work which has been described as the "springboard" for all philosophical thinking. "Spinoza, Liberalism and the Question of Jewish Identity," by Steven B. Smith. Yale University Press, 270 pp.

Contemplating modern Jewish existence on the basis of a book written in the 17th century may sound surprising and irrelevant in our day. However, the rise of religious fundamentalism in the United States (and Israel) and the crude denunciation of modern society and liberal values by religious fanatics have us running back to the origins of liberal theory. Once again, we are interested in how the first enlightened people approached religious issues we naively thought belonged to the Middle Ages but keep cropping up today, disturbing our peace of mind.

A core question we grapple with even today is whether politics controls religion or religion controls politics. Thefounders of "secular theology," the early theoreticians of the modern state - Hobbes, Locke, Leibniz, Kant and, of course, Spinoza - all pondered the status of religious orthodoxy and offered the conceptual basis for liberalism in a clerical regime: separating religion and politics. Politics would be reserved for civil issues, namely the protection of life, civil liberties, health and property; religion would be reserved for private affairs - personal preferences and matters of conscience. "Privatizing" religion, they believed, would prevent power-hungry religious clerics from influencing political life, and the result would be a tolerant system respectful of religious minorities and persons outside the mainstream.

Smith's book analyzes Spinoza's "Tractatus Theologic-Politicus" not as a philosophical treatise but as a work of political science whose major importance lies in the fact that it addresses, for the first time in European history, the "Jewish question" - how the Jews should be part of the society around them and fit into the broad framework of European political thought.

Smith says straight off that Spinoza's ultimate goal as a political theoretician was not to persuade the Jews to convert to Christianity (he himself never did, although he was excommunicated from the Jewish community in 1656), but to strive for absolute secularization. What Spinoza wanted, essentially, was to change Judaism from a religion into a modern secular identity. Seen in this way, Spinoza's "Tractatus Theologic-Politicus" becomes the first and most in-depth expression of a liberal approach that offers Jews, as a substitute for the Mosaic laws, a very different kind of "Promised Land" - one which is grounded in three basic freedoms: freedom of religion, freedom of commerce and freedom of thought. This is a democratic outlook that is clearly anti-clerical in orientation.

At its core, "Tractatus Theologic-Politicus" is about freedom, and more specifically, freedom of thought. Thought (philosophy) represents a very different kind of knowledge than does theology: It is logical and tries to delve into the reasons for things, while theology is aimed at piety and obedience rather than knowing the truth. That is why philosophy (free thought) and theology are constantly battling one another, and in this struggle clerics exploit the fact that man's soul "gravitates between hope and fear" to amass power and assure their own standing by perpetuating ignorance and superstition.

Superstitions and illogical thinking stem from a single theological bias, and that fundamental bias upon which all other biases are founded is the attribution of authority to the Old and New Testaments. The proper way to achieve freedom of thought is to liberate human beings from the superstitions in the Bible - to hone their ability to judge sacred writings rationally, or employ Biblical criticism, as we would say nowadays. Biblical criticism, says Spinoza, is the essence of rational thinking.

It was this approach that made him a true revolutionary. Long before Julius Wellhausen, the founder of 19th century Biblical exegesis, Spinoza was a trailblazer of the historical and secular approach to Biblical texts and rejected the divine authorship of the Pentateuch.

Spinoza thus aimed his attack on the Bible at its weakest point: its claim of divinity. He describes Moses as a down-to-earth leader, the founder of a nation no different than the founders of other nations. His laws were not universal but applicable to one particular nation at one particular period. The Jewish people itself had no special mission or advantage over any other people, nor was it possible for any nation to be intellectually or morally superior to others. To say that one people is "chosen" and others are not is merely an attempt to gain control and subjugate those others. Spinoza's criticism of the Bible had a clear purpose: secularization of society and setting man and society free from the strangulating belief in miracles, amulets, blessings and holy places.

Smith strongly denies that Spinoza had any kind of political "Zionist" outlook, which is just what one would expect from a liberal American Jew. But on one cardinal point, at least, Spinoza resembled the most Zionist of Zionists: his contention that years of devotion to religion were responsible for castrating the Jews politically. Like the Zionist thinkers and pioneers, Spinoza held that religious belief in the Bible weakened the Jews and perpetuated their political impotence. Waiting for divine miracles and for God to keep his promises was a barrier to improving their miserable lot.

Smith has trouble dealing not only with Spinoza's "Zionism" but also with his "liberalism," perhaps because it does not entirely correspond with the Western liberalism of today. To a large extent, Spinoza's approach rules out separation of church and state. Established religion is envisaged as completely subservient to the secular-democratic regime and its laws. According to Spinoza, supremacy of the secular regime is essential for safeguarding political, intellectual and religious liberty. Strict obedience to a secular regime could also conceivably be a threat to freedom, but if that regime is a democracy, there is nothing to fear, because it is unlikely that the people - who essentially rule the country in a democracy - would do anything to harm themselves or their own liberty. Spinoza's liberalism differs substantially from the liberalism we know, because he believes in a strong, aggressive democracy able to protect the individual from the ruthlessness of the clergy and win the fierce battle between religion and secular government.

Spinoza clearly feels that there are two options: either the secular regime wins or the clergy wins. This is a zero-sum game in which the victor "takes the whole pot" and the loser is swept off the board. To insure its effectiveness, the secular regime must use the melting pot we call a state to create a uniform society. From Spinoza's standpoint, cultivating pluralism and distinctive values that encourage social diversity only plays into the hands of the clergy and weakens the democratic entity. Nostalgia for some glorious past or lamenting the loss of ancestral traditions are a guaranteed recipe for separatism, social dissolution and the rise of religious orthodoxy. This kind of liberalism is certainly not American (or Israeli), with its emphasis on multiculturalism.

There were times when the heads of the State of Israel were also great believers in the melting pot theory. Many Zionist leaders, including David Ben-Gurion, embraced Spinoza as one of the illustrious heroes of the Jewish people. Spinoza, they said, was a true Zionist, and it was time to right the historical wrong of his excommunication by the religious community. In our day, the man responsible for developing military thought in the Israel Defense Forces, Brig.-Gen. Yaakov Amidror, has taken the liberty of scolding Supreme Court Justice Aharon Barak for calling Spinoza the flesh and blood of Judaism. But who knows? He may be right. Spinoza certainly fits the bill for the first secular Israeli.

Yishai Cordova is the chief editor of the Ministry of Defense publishing house. Ha'aretz Thursday, February 4, 1999.