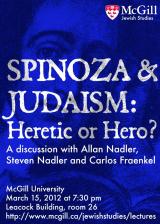 “Religious Jews revile him [Spinoza] as the arch-heretic while secular Jews, from Yiddish Socialists and Bundists to liberal Zionists have celebrated him for more than a century as a precursor and hero. Or was he just trying to reform European Christendom?” 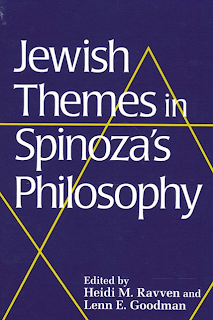 The facts of the matter are clear and well-known. Baruch de Spinoza was born, raised and educated as a Jew in seventeenth-century Amsterdam. He went to Amsterdam’s Portuguese Jewish community’s elementary school as a boy, and while he appears not to have formally pursued higher level classes, he probably did attend one of the community’s yeshivot, or adult study academies, during his years as a young merchant. Spinoza’s knowledge of Jewish history, textual sources, and thought, including medieval Jewish philosophy, is evident throughout his writings.

He was, if not a Jewish philosopher, a Jew whose philosophy is undoubtedly informed by his Judaism. The question, then, is why do so many scholars ignore or even deny that this Jewish context has any bearing on our understanding of Spinoza’s philosophy? Philosophical work on Spinoza has never been better. Every year, new and illuminating studies on his metaphysics, epistemology and his religious and political thought (and, unfortunately to a lesser degree, his ethics) contribute to deepening our understanding of his system. And yet, despite Wolfson’s great beginning almost seventy years ago, substantive studies by Anglo-American philosophers of Spinoza’s relationship to earlier Jewish philosophy are few and far between. Worse, some commentators go out of their way to reject the relevance of the Jewish background for the study of Spinoza’s ideas.

This new collection of essays is intended to correct, to some degree, this imbalance. Its aims are modest. The idea is not to provide insights into Spinoza’s Jewish sources and to show how he adapted this or that notion from earlier Jewish thinkers (although some of the essays do indeed do this). Nor is it to offer judgments of Spinoza relative to some normative Jewish position and demonstrate either his heterodoxy or traditionalism (although some of the essays also do this). Rather, as the editors state in their introduction, the purpose of the volume’s chapters is to “explore Spinoza’s philosophic ideas and raise the question of the resonance or dissonance of these ideas with the full array of Jewish sources, traditions and themes” (5). What this means is that the essays are supposed to approach a variety of traditional Jewish ideas, values, and themes and see both how they get worked through in Spinoza’s philosophy and how Spinoza’s reworking of them is transmitted to posterity. “Our aim is to take the most empirical and wide-ranging view of what can and should be deemed Judaic and to seek the resonances and the enduring insights that re-echo from those resonances in the philosophy of Spinoza” (5). The overall theme, in other words, is Jewish aspects of Spinoza’s philosophy and their legacy.

This is an enormously important set of questions, and such a project is long overdue. To some extent, this volume succeeds in achieving its aims. The essays range widely over many facets of Spinoza’s thought – not just the Ethics, Theological-Political Treatise, and other strictly philosophical works, but also the Hebrew compendium and the background to his cherem. There is some solid philosophical and tight analytic work, as well as more historicallyand textually-oriented discussion.

There are some very creative approaches to Spinoza here. On the other hand, it is a rather uneven collection. One contribution is a very long, broad survey of a great variety of themes; another is an exceedingly short look at a narrow issue. A few of the essays do indeed illuminate a difficult or complex aspect of Spinoza’s metaphysics or political thought; some, however, are a little tedious, and it is hard to see what new contribution they make to our understanding of Spinoza’s ideas and life.

The volume begins with Lenn Goodman’s extensive and rich survey, what the editors call “a complete review of Spinoza’s philosophy”. The wide-ranging chapter is given some focus by thirteen standard philosophical themes (e.g., The One and the Many, Freedom and Determinism, Knowledge and Skepticism). Goodman’s point is to show both how Spinoza’s thought is related to classic Jewish philosophy, and how classic Jewish philosophy itself wrestles with the central problems of philosophy in general. He looks at how Spinoza’s approach to these problems draws on Jewish ideas.

Lee Rice’s essay, “Love of God in Spinoza”, is a fine philosophical study of the nature of God’s immanence in Spinoza, and especially how Spinoza’s account of the love of God reflects an ancient Jewish insight. He insists that “it is the immanentism and naturalism of ancient Jewish thought to which Spinoza allies himself, rather than the frantic dualisms that he perceives as mediaeval in origin” (103). Along the way, he does a fine job of clearing up an ambiguity at the heart of Spinoza’s account of the love of God.

In the too-brief essay, “Spinoza’s Metaphysical Hebraism”, Warren Zev Harvey rehearses some of the questions raised by Spinoza’s compendium of Hebrew grammar, especially regarding parallels between this linguistic work and his metaphysical ideas.

Kenneth Seeskin provides a good analysis of the differences between Spinoza and Maimonides on divine creation in “Maimonides, Spinoza and the Problem of Creation”. He also considera the gap between Maimonides’ transcendent God and Spinoza’s immanent God, and shows how the differences between them on the question of creation are reflected in current debates over the origin of the universe.

In “‘That Hebrew Word’: Spinoza and the Concept of the Shekhinah”, Warren Montag argues that a famously puzzling line from the authorities cross-examination of Spinoza’s friend Johannes Koerbagh – “What was the meaning of the Hebrew word Schabinot?” – in fact leads us back to a kabbalistic dimension of Spinoza’s thought. Spinoza, Montag argues, takes the notion of Shekhinah and God’s immanence from the kabbalah and turns it back against superstitious conceptions and uses of God. Spinoza, he suggests, was thus a kabbalistic a+ntikabbalist.

Edwin Curley’s chapter, “Maimonides, Spinoza and the Book of Job”, is a long, insightful study of theodicy in Maimonides and Spinoza (as well as Menasseh ben Israel). After an analysis of the Biblical story, he examines both Maimonides’ interpretation of Job in the Guide for the Perplexed and Spinoza’s remarks on both Maimonides and Job in the Theological Political Treatise. He finds in Job a precedent for Spinoza’s own dismissal of traditional theodicy.

Heidi Ravven’s “Spinoza’s Rupture With Tradition: His Hints of a Jewish Modernity” considers the role of the imagination in the Ethics and the Theological-Political Treatise. She argues that it is not simply the passive faculty of receiving images from the senses, but also performs an important role both in terms of socialization and in terms of transmitting certain aspects of religious tradition.

In “Why Spinoza Chose the Hebrews: The Exemplary Function of Prophecy in the Theological-Political Treatise”, Michael Rosenthal compares Moses’ use of prophecy in the Bible to create and structure early Israelite society with Spinoza’s use of Scripture itself to argue for a secular polity in contemporary Netherlands. He organizes his argument around the theme of an “exemplar” and the moral, social and political uses to which such a device can be put.

Finally, Richard Popkin’s essay, “Spinoza’s Excommunication”, reviews some facts, myths, and hypotheses around Spinoza’s cherem. One of the lessons he tries to convey is that Spinoza worked to distance himself from Judaism. This is an interesting counterpoint to the general conclusion offered by the other essays in the volume, in so far as it shows that if Spinoza’s philosophy is indeed a Jewish philosophy, it is not because of any conscious decision on Spinoza’s part to work within the tradition.

This is a volume well worth reading. There are a couple of truly valuable essays in it. And even the less substantial contributions succeed in raising important and interesting questions and point to what will undoubtedly be fruitful arenas for further research into Spinoza’s relationship to Judaism.