A VERY few years ago the writings of Spinoza were almost unknown in this country. The only authorities to which the English reader could be referred were the brilliant essays of Mr. Froude1 and Mr. Matthew Arnold,2 the graphic but somewhat misleading sketch in Lewes’s “History of Philosophy,” and the unsatisfactory volume of Dr. R. Willis.3 But in 1880 Mr. Pollock brought out his most valuable “Spinoza, his Life and Philosophy,”4 likely long to remain the standard work on the subject; Dr. Martineau has followed with a sympathetic and gracefully written “Study of Spinoza;” Professor Knight has edited a volume of Spinozistic Essays by Continental Philosophers; Auerbach’s biographical novel5 has been translated, and many writers have made contributions to the subject in magazines and reviews.

At first sight this stir of tardy recognition may seem less surprising than the preceding apathy, for history can show few figures more remarkable than the solitary thinker of Amsterdam. But the causes which kept Spinoza in comparative obscurity are not very far to seek. Personally he shrank with almost womanly sensitiveness from anything like notoriety: his chief work was withheld till after his death, and then published anonymously; his treatise on Religion was also put forth in secret, and he disclaims with evident sincerity all desire to found a school, or give his name to a sect.

Again, the form in which his principal work is cast is such as to repel those dilettante readers, whose suffrage is necessary for a widely-extended reputation; none but genuine students would care to grapple with the serried array of definitions, axioms, and propositions, of which the Ethics is composed, while the display of geometric accuracy flatters the careless into supposing, that the whole structure is interdependent, and that, when a single breach has been effected, the entire fabric has been demolished.

The matter, no less than the manner, of Spinoza’s writings was such as to preclude popularity. He genuinely shocked his contemporaries. Advances in thought are tolerated in proportion as they respond to and, as it were, kindle into flame ideas which are already smouldering obscurely in many minds. A teacher may deepen, modify, transfigure what he finds, but he must not attempt radical reconstruction. In the seventeenth century all men’s deepest convictions were inseparably bound up with anthropomorphic notions of the Deity; Spinoza, in attacking these latter and endeavouring to substitute the conception of eternal and necessary law, seemed to be striking at the very roots of moral order: hence with curious irony his works, which few read and still fewer understood, became associated with notions of monstrous impiety, and their author, who loved virtue with single-hearted and saintly devotion, was branded as a railer against God and a subverter of morality, whom it was a shame even to speak of. Those from whom juster views might have been expected swelled the popular cry. The Cartesians sought to confirm their own precarious reputation for orthodoxy by emphatic disavowals of their more daring associate. Leibnitz, who had known Spinoza personally, speaks of him, whether from jealousy or some more avowable motive, in tones of consistent depreciation.

The torrent of abuse, which poured forth from the theologians and their allies, served to overwhelm the ethical and metaphysical aspect of Spinoza’s teaching. The philosopher was hidden behind the arch-heretic. Throughout almost the whole of the century following his death, he is spoken of in terms displaying complete misapprehension of his importance and scope. The grossly inaccurate account given by Bayle in the “Dictionnaire Philosophique” was accepted as sufficient. The only symptom of a following is found in the religious sect of Hattemists, which based some of its doctrines on an imperfect understanding of the so-called mystic passages in the Ethics. The first real recognition came from Lessing, who found in Spinoza a strength and solace he sought in vain elsewhere, though he never accepted the system as a whole. His conversation with Jacobi (1780), a diligent though hostile student of the Ethics, may be said to mark the beginning of a new epoch in the history of Spinozism. Attention once attracted was never again withdrawn, and received a powerful impulse from Goethe, who more than once confessed his indebtedness to the Ethics, which indeed is abundantly evident throughout his writings. Schleiermacher paid an eloquent tribute to “the holy, the rejected Spinoza.” Novalis celebrated him as “the man intoxicated with Deity” (der Gottvertrunkene Mann), and Heine for once forgot to sneer, as he recounted his life. The brilliant novelist, Auerbach, has not only translated his complete works, but has also made his history the subject of a biographical romance. Among German philosophers Kant is, perhaps, the last, who shows no traces of Spinozism. Hegel has declared, that “to be a philosopher one must first be a Spinozist.” In recent years a new impulse has been given to the study of the Ethics by their curious harmony with the last results of physiological research.

In France Spinoza has till lately been viewed as a disciple and perverter of Descartes. M. Emile Saisset prefixed to his translation of the philosopher’s chief works a critical introduction written from this standpoint. Since the scientific study of philosophic systems has begun among the French, M. Paul Janet has written on Spinoza as a link in the chain of the history of thought; a new translation of his complete works has been started, and M. Renan has delivered a discourse on him at the bicentenary of his death celebrated at the Hague.

In Holland there has also been a revival of interest in the illustrious Dutch thinker. Professors Van Vloten and Land were mainly instrumental in procuring the erection of a statue to his memory, and are now engaged in a fine edition of his works, of which the first volume has appeared.6 In England, as before said, the interest in Spinoza has till recently been slight. The controversialists of the eighteenth century, with the exception of Toland, passed him by as unworthy of serious study. The first recognition of his true character came probably from Germany through Coleridge, who in his desultory way expressed enthusiastic admiration, and recorded his opinion (in a pencil note to a passage in Schelling), that the Ethics, the Novum Organum, and the Critique of Pure Reason were the three greatest works written since the introduction of Christianity. The influence of Spinoza has been traced by Mr. Pollock in Wordsworth, and it is on record that Shelley not only contemplated but began a translation of the Tractatus Theologico-Politicus, to be published with a preface by Lord Byron, but the project was cut short by his death. It is said that George Eliot left behind her at her decease a MS. translation of the Ethics.

It may strike those who are strangers to Spinoza as curious, that, notwithstanding the severely abstract nature of his method, so many poets and imaginative writers should be found among his adherents. Lessing, Goethe, Heine, Auerbach, Coleridge, Shelley, George Eliot; most of these not only admired him, but studied him deeply. On closer approach the apparent anomaly vanishes. There is about Spinoza a power and a charm, which appeals strongly to the poetic sense. He seems to dwell among heights, which most men see only in far off, momentary glimpses. The world of men is spread out before him, the workings of the human heart lie bared to his gaze, but he does not fall to weeping, or to laughter, or to reviling: his thoughts are ever with the eternal, and something of the beauty and calm of eternal things has passed into his teaching. If we may, as he himself was wont to do, interpret spiritually a Bible legend, we may say of him that, like Moses returning from Sinai, he bears in his presence the witness that he has held communion with the Most High.

The main authority for the facts of Spinoza’s life is a short biography by Johannes Colerus7 (Köhler), Lutheran pastor at the Hague, who occupied the lodgings formerly tenanted by the philosopher. The orthodox Christian felt a genuine abhorrence for the doctrines, which he regarded as atheistic, but was honest enough to recognize the stainless purity of their author’s character. He sets forth what he has to say with a quaint directness in admirable keeping with the outward simplicity of the life he depicts.

Further authentic information is obtainable from passing notices in the works of Leibnitz, and from Spinoza’s published correspondence, though the editors of the latter have suppressed all that appeared to them of merely personal interest. There is also a biography attributed to Lucas, physician at the Hague (1712), but this is merely a confused panegyric, and is often at variance with more trustworthy records. Additional details may be gleaned from Bayle’s hostile and inaccurate article in the “Dictionnaire Philosophique;” from S. Kortholt’s preface to the second edition (1700) of his father’s book “De tribus impostoribus magnis:” and, lastly, from the recollections of Colonel Stoupe (1673), an officer in the Swiss service, who had met the philosopher at Utrecht, but does not contribute much to our knowledge.

It remains to say a few words about the present version. I alone am responsible for the contents of these volumes, with the exception of the Political Treatise, which has been translated for me by my friend Mr. A. H. Gosset, Fellow of New College, Oxford, who has also, in my absence from England, kindly seen the work through the press. I have throughout followed Bruder’s text,8 correcting a few obvious misprints. The additional letters given in Professor Van Vloten’s Supplement,9 have been inserted in their due order.

This may claim to be the first version10 of Spinoza’s works offered to the English reader; for, though Dr. R. Willis has gone over most of the ground before, he laboured under the disadvantages of a very imperfect acquaintance with Latin, and very loose notions of accuracy. The Tractatus Theologico-Politicus had been previously translated in 1689. Mr. Pollock describes this early version as “pretty accurate, but of no great literary merit.”

Whatever my own shortcomings, I have never consciously eluded a difficulty by a paraphrase. Clearness has throughout been aimed at in preference to elegance. Though the precise meaning of some of the philosophical terms (e.g. idea) varies in different passages, I have, as far as possible, given a uniform rendering, not venturing to attempt greater subtlety than I found. I have abstained from notes; for, if given on an adequate scale, they would have unduly swelled the bulk of the work. Moreover, excellent commentaries are readily accessible.

4  I take this early opportunity of recording my deep obligations to Mr. Pollock’s book. I have made free use of it, together with Dr. Martineau’s, in compiling this introduction. In the passages which Mr. Pollock has incidentally translated, I have been glad to be able to refer to the versions of so distinguished a scholar.

7  Originally written in Dutch (1706). Translated the same year into French and English, and afterwards (1723) into German. The English version is reprinted in Mr. Pollock’s book as an appendix.

9  “Ad B. D. S. Opera quæ Supersunt Omnia Supplementum.” Amsterdam, 1862. 10  While these volumes were passing through the press, a translation of the Ethics appeared by Mr. Hale White (Trübner and Co.). The Tractatus Politicus was translated in 1854 by W. Maccall, but the book has become so rare as to be practically inaccessible. 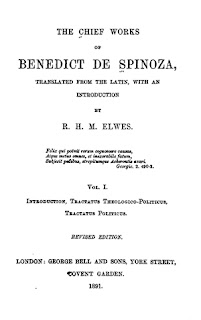 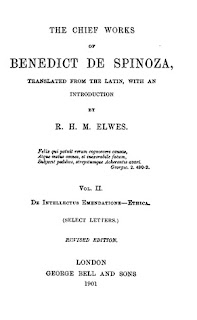