A splendid and credible book about a passionate Spinoza 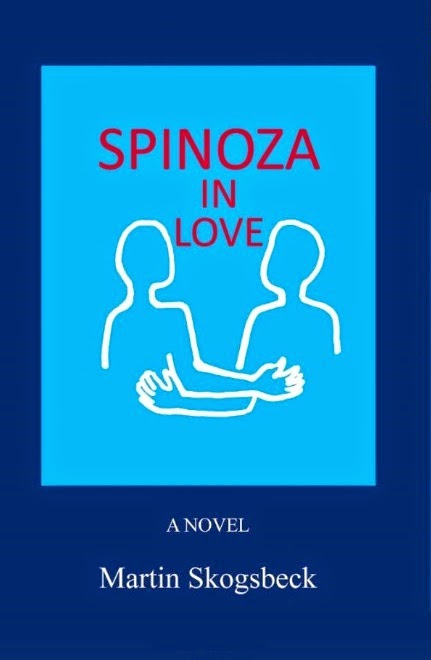 What a splendid novel, really beautiful! I enjoyed it very much. It is an unexpected, unique, successful and credible novel about – yes – the hitherto unknown life of Spinoza: Spinoza in Love by Martin Skogsbeck. [cf. Amazon]

Of all the novels I have read in which Spinoza somehow or other appears, I undoubtedly rate this one as the finest. Its author wishes to fill the gaps of what is unknown about Spinoza’s biography, and does so by revealing his real and most intimate personal life. The reader gets a picture of a Spinoza who actually lived and didn’t just think rationally about life. In this book Spinoza is very different from what Dionijs Burger once wrote in the middle of the 19th century, that he was a man ‘dead for real life’.

At the end of the story, Skogsbeck lets the narrator of the tale, an intimate friend of Spinoza, say “How can anybody aspire to grasp Benito’s ideas without a notion of who he was as a person? In his texts you will discover his wit and rigour, granted. But not the humanity, the passion and the courage.” (p. 350). The passion is well conveyed in this cleverly construed book, and not just in small doses.

One difficulty in writing a review is not to spoil the enjoyment for the reader by revealing too much of the story. The attraction lies in the unexpected, and the surprise offered to the reader.

Perhaps the cover of the book already hints at what I just gave away: a passionate, male love relationship. How elegantly the reader is led to this sudden and unexpected revelation! And does Spinoza remain a cool, detached and rational observer of life when confronted with earthly love? Not at all, this book reveals: “he was truly passionate when freed from all inhibition,” Spinoza’s lover tells us, pleased with how intensely his hero loves life itself. (p. 168).

Unlike in Goce’s Smilevski’s Conversation with Spinoza, Spinoza is here not criticized for having neglected earthly love but is shown to have known it - in this form.

The book’s framework is ingenious. The prologue explains how the document containing the narrator’s recollections has remained hidden for over three centuries, only to resurface in 2010. That in itself is quite a story. The actual events take place in the 17th century. Skogsbeck weaves all kinds of references into his tale in a way that makes it credible that the text was indeed written by a contemporary of Spinoza. The very tight barge schedule in the Republic, for example - the skippers departed at the prescribed time and no later, whoever had not yet boarded would be left staring at the leaving boat.

This is a fine achievement. It is also striking to discover how naturally the author has woven a variety of well known facts about the life of Spinoza into the story. I may reveal, for example, that the narrator witnesses the execution of Franciscus van den Enden in Paris; he has managed to attend as the so-called assistant to the supervising physician. Franciscus asks him to pass on his final greetings to Benedictus. As reader you will discover all sorts of things, as if you were given an account of the 17th century by a new eyewitness.

We get additional reasons for understanding why Spinoza was such an outcast philosopher. (p.260) We get a new, possible origin to the cause of the cherem (sexual harassment). We get scenes from the school of van den Enden, which the fictional narrator Christiaan van Ermelhoven attended. That is where he meets the few years older Spinoza for the first time. In the Black Swan tavern they learn to know each other better and have lively conversations about Descartes, whom Spinoza very much admired at the time. In Christiaan’s home, an upper-class residence on the Singel, Spinoza is introduced to eating with a fork, a new item at the time. It is enjoyable to read how Spinoza uses this experience to illustrate his geometric approach.

We get a beautiful account of a conversation about determinism and necessity in Jan Rieuwertsz’ bookstore “The Book of Martyrs”. There is also a nice explanation of Spinoza's concepts of substance, attributes and modes.

We get detailed information on how Spinoza learned lens grinding. We get a spinozist ‘defense’ of the nature of homosexual love. (p. 106-107). We also get to read a very un-spinozist sentence in a farewell letter: "Seek not to understand, but to forget." The sentence, however, becomes understandable later in the book.

The story is fairly straight forward, told in chronological order, with sporadic flashbacks, but no modernist frills. It captures the essence of a great 19th century novel, but without the lengthy digressions and descriptions of nature and surroundings. And it does so with passionate, ecstatic and yet restrained descriptions of ‘transient love’.

As a kind of request for clemency from the critic, the narrator writes: “I am the first one to recognise that my ardour for writing is far greater than the talent by which it is guided.” (p.87). While I, with my modest knowledge of the English language, am no expert to judge, I can say that this author has talent, perhaps not from a poetic standpoint, but he knows how to construct a well told and clear story. In short, it works. And the rendition of large parts of Spinoza's philosophy also works.

In addition to the aspects already mentioned, Spinoza in Love frequently illustrates the tendency for self-preservation (conatus) and, towards the end of the book, discusses extensively the political theory of Spinoza. (It is perhaps therefore Marin Terpstra receives credit in the acknowledgements section. But also because "[he] provided insight and advise on the interpretation of Spinoza's philosophy as well as on the plausibility of the book's fictional content." As my discussion here should prove, I also agree on the plausibility of the content. (By the way, there is a review written by Terpstra that appeared on Amazon on sept 23, 2014.)

In summary, I really think Martin Skogbeck has delivered a masterpiece with his novel Spinoza in Love. How many have, over time, pointed to Spinoza as being far too rational and cerebral in his view of mankind? I referred to Goce Smilevski and to mention one more, George Santayana, who found that Spinoza had little appreciation of, and left no room for, man’s passions.

Well, to all those who said so, the answer is here: we have a very passionate Spinoza, who eventually admits to his friend that he has come to understand the value of interpersonal love and relationships (and not just the amor dei intellectualis). When reunited after a long separation, Spinoza tells him: “I never stopped loving you, Christiaan. Being without you for so long made me understand that there are also worthy passions. And that anyone can have them, including me.”(p. 307)

A great review for a great book! Thank you Stan

Thank you, Marianne.
Since yesterday is my review also on Amazon.