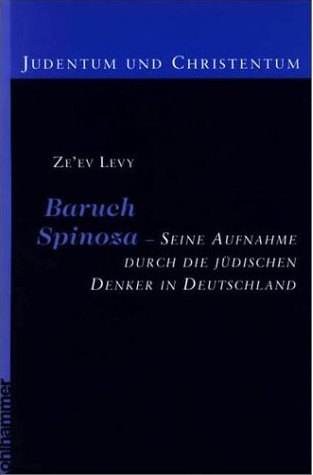 Given the fact that Spinoza is still persona non grata in Israel (pp. 11, 127), Ze'ev Levy addresses the question of "whether and in what degree Spinoza's philosophy participates in modern Jewish intellectual life" (p. 19). His aim is to show that at least from the middle of the nineteenth century on, "most Jewish scholars regarded Spinoza as a legitimate, although controversial, part and parcel of the Jewish history of ideas" (p. 142). And as "Germany and the German cultural circle was the center of Jewish thought in modern times" (p. 271), it is quite natural that Levy deals nearly exclusively with, as he says, "Jewish thinkers in Germany." He starts with Moses Mendelssohn (1728-1786) as the "turning point in the relation to Spinoza in Germany" (p. 21) and ends with Leo Strauss (1899-1973), "the last great Jewish scholar and philosopher in Germany who has contributed much to Spinoza research" (p. 247).

Levy discusses the various doctrines of Spinoza that caused him to be banned from the Jewish spiritual community and points out that only since the nineteenth century, when secular tendencies invaded Jewish life, has Spinoza's philosophy been judged a part, although controversial, of the Jewish tradition which has left important traces in modern thought.

The authors Levy discusses can be arranged into four groups.

• First come those who argued against the ban on reading Spinoza. Moses Mendelssohn tried to show that Spinoza played an essential part in the history of modern philosophy and metaphysics, although not necessarily Jewish philosophy. Levy demonstrates that Mendelssohn was only interested in a "purified spinozism" that does not destroy the theistic foundations of morality; however, Mendelssohn was the first Jew to discuss Spinoza's philosophy publicly. Also in this first group are Salomon Maimon (1753-1800), the first Jewish thinker who attributed an unbiasedly positive role to Spinoza in the development of modern philosophy; Berthold Auerbach (1812-1882), the poet who was the first to translate most of Spinoza's works into German and who wrote a novel in which Spinoza's friend Lodewijk Meyer stated that it was a Jew (i.e., Spinoza) who was the first "son of mankind," the first truly universal thinker; and Julius Guttman (1880-1950) and Leo Strauss, who also thought that Spinoza belonged to modern philosophy but not Jewish philosophy.

• The second group would include, if Levy's claim is well founded, a number of authors who held that Spinoza is not only a decisive figure in modern European philosophy but genuinely belongs to the Jewish history of ideas. Levy mentions two, Moses Hess (1812-1875) and David Baumgardt (1890-1963). Hess, the founder of socialism in Germany and of Zionism, always understood himself as a true disciple of "the master" Spinoza. His construction of world history placed Adam, Jesus, and Spinoza as the figures representing the three stages of history and thus revealed his Jewish inspiration. Baumgardt referred to Spinoza in support of his own hedonistically based philosophy because he thought that it was Spinoza who, by elaborating a utilitarian approach to human perfection that was rooted in Judaism, resisted Christianity's attempts to overcome this world. Baumgardt, according to Levy, "became the first of the Jewish philosophers in the twentieth century . . . who was engaged in compensating the injury that had been committed to Spinoza by Jewish historiography and Jewish thought" (p. 213).

• Levy finds a third group of authors ambiguous toward Spinoza. The historian of Jewish history, Heinrich Graetz (1817-1891), described Spinoza's relation to Judaism as that of a "murderer of his mother"; on the other hand, he considered Spinoza one of the "greatest thinkers of his time, who brought with him a new salvation" (p. 147). Jakob Klatzkin (1882-1948), translated Spinoza's Ethics into Hebrew and wrote a monograph on Spinoza in Hebrew. Levy calls him an "admirer and translator of the Ethics and an enemy of the TTP" (ch. 8). Klatzkin was one of the rare few who integrated Spinoza into Judaism and stressed his importance for the Jewish history of ideas, at the same time that he deplored his alienation from Judaism.

• The fourth group of thinkers criticized Spinoza and condemned him as a "traitor of Judaism." The most prominent of these was the neo-Kantian philosopher Hermann Cohen (1842-1918). He accused Spinoza of an "incomprehensible treason" because of his desertion to Christendom and of having inaugurated "racial hate against the Jews" (p. 189). An admirer of Kant's philosphy, he held Spinoza responsible for Kant's negative image of the Jews. I would add that Spinoza's non-normative ethics, i.e., his critique of the normative foundation of a genuinely ethical conduct of life, and his critique of the Hebrew prophets as seditious, may be responsible as well for the exaggeratedly hateful tone in Cohen's rejection of Spinoza.

If Guttmann says that the re-entry of Spinoza into the Jewish philosophical discourse was enforced by the overwhelming impression that Spinoza's philosophy made on modern philosphers outside the Jewish world—which, in my opinion, is a correct observation—, it easily explains why this Jewish discourse about Spinoza began and was mainly conducted by Jewish thinkers in Germany. For it was in Germany, during the time of Goethe, that Spinoza was for the first time acknowledged as a classic of philosphy, as a genuinely religious thinker who inspired many of the leading poets and, later, scientists as well.

German-Jewish thinkers were forced to make up their minds about the impact of Spinoza's philosophy on the modern and contemporary spiritual world. Levy's book shows that thinkers are far from unanimous on the question of whether Spinoza has become a part of modern Jewish thought. Although his book is not always well structured, still it makes available to the reader a wealth of positions and arguments from the Jewish debate on Spinoza in the German language—a lost inheritance (even in contemporary Germany) that will profit every reader interested in the issue.