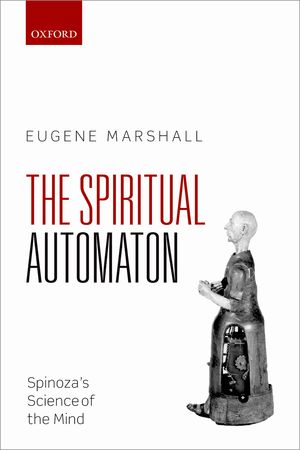 Eugene Marshall presents an original, systematic account of Spinoza's philosophy of mind, in which the mind is presented as an affective mechanism, one that, when rational, behaves as a spiritual automaton. The central feature of the account is a novel concept of consciousness, one that identifies consciousness with affectivity, a property of an idea paradigmatically but not exhaustively instantiated by those modes of thought Spinoza calls affects. Inadequate and adequate ideas come to consciousness, and thus impact our well-being and establish or disturb our happiness, only insofar as they become affects and, thus, conscious. And ideas become affects by entering into appropriate causal relations with the other ideas that constitute a mind. Furthermore, the topic of consciousness in Spinoza provides an eminently well-placed point of entry into his system, because it flows directly out of his central metaphysical, epistemological, and psychological commitments—and it does so in a way that allows us to see Spinoza's philosophy as a systematic whole. Further, doing so provides a thoroughly consistent yet novel way of thinking about central themes in his thought. Marshall's reading provides a novel understanding of adequacy, innateness, power, activity and passivity, the affects, the conatus, bondage, freedom, the illusion of free will, akrasia, blessedness, salvation, and the eternity of the soul. In short, by explaining the affective mechanisms of consciousness in Spinoza, The Spiritual Automaton illuminates Spinoza's systematic philosophical and ethical project as a whole, as well as in its details, in a striking new way. [Cf.]

Thirteen original essays by leading scholars explore aspects of Spinoza's ethical theory and, in doing so, deepen our understanding of the richly rewarding core of his system. Given its importance to his philosophical ambitions, it is surprising that his ethics has, until recently, received relatively little scholarly attention. Anglophone philosophy has tended to focus on Spinoza's contribution to metaphysics and epistemology, while philosophy in continental Europe has tended to show greater interest in his political philosophy. This tendency is problematic not only because it overlooks a central part of Spinoza's project, but also because it threatens to present a distorted picture of his philosophy. Moreover, Spinoza's ethics, like other branches of his philosophy, is complex, difficult, and, at times, paradoxical. The essays in this volume advance our understanding of his ethics and also help us to appreciate it as the centerpiece of his system. In addition to resolving interpretive difficulties and advancing longstanding debates, these essays point the direction for future research. Spinoza's enduring contribution to the development of ethical theory, to early modern philosophy, and indeed to early modern history generally, provide us with good reason to follow the lead of these essays. [Cf. ]

Joseph Almog, Everything in Its Right Place. Spinoza and Life by the Light of Nature. OUP, February 2014 (estimated) [Cf.]